I think I will be readjusting my goals. It was a somewhat hard winter, so I didn’t have the chance to be riding every week as was my original plan. Furthermore, the past month the road seems full of bad drivers. Cutting offs are very usual, noone seems to know what the indicator lights do, and I even got honked at because I wouldn’t pass to the other side of the road and be crashed by incoming vehicles. There are also some new traffic lights on the way, and I think the only way to pass them all without hitting a red light is to travel at warp 9, or at least 120 km/h – which is absurd on such a narrow street! Some roads are being “redesigned” for some weird reason, so that you have to go around and travel about 1 km to get 50 meters north!

I went with my more experienced cousin today and bought myself a bicycle. It’s a black Ideal Ergomax (a Greek bike industry) and it’s something like a hybrid city-mountain bike. I didn’t get a change to ride it, other than outside the store, because of the transport (the wheels and the brakes are currently disconnected), but indeed riding a bicycle is like … riding a bicycle (ok, lame joke, but I’ve been waiting very long to say this). I mean even after 15 years since I’ve even touched a bicycle, I still can ride. The only difference is that this one has real brakes that actually stop movement (as opposed to my learning bike that just pretended to do so).

So, why now, at 32? Well, the first and foremost reason is of course I really need the exercise, and an exercise bicycle (which I also own, and is gathering dust, as most exercise bikes are) is too boring (especially my own, since I can’t even read a book properly while riding). My ultimate goal is of course riding to work, since that’s just 11 km, and all flat. Of course I don’t shun driving and cars, but if I can do the same distance in about the same time, why waste gasoline etc? I’m not such a raving environmentalist, I love driving, but it’s a whole lot more healthy to ride to work.

Of course there’s every chance that I’ll either get bored very soon (I’m dreading late night rides back), or that I’ll chicken out (I mean, riding around through traffic?). Still, it seems a dreadful pity to be here, out in the country (of sorts) and not take advantage of the openness and nature. Driving is fun when driving large distances, but to really appreciate and grok a place, you have to go slow! 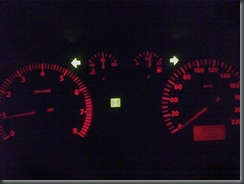 I have my SEAT Ibiza for just a few days over 6 years now, and I must say I’m quite happy with it. The only things that have broken down are just a fuse in the engine, the electric window mechanism and the turn signal lever (all fixed of course). It remains a very powerful car for its engine size (1400 cc, but 101 horsepower), and because it’s relatively light, it is not rare for other drivers to eat my dust :). It is very comfortable, to the point I prefer sitting in there to sitting on a normal chair, and in the rare cases I traveled long distances, I can’t say I was tired at the end (even though it "complained" that two or even four hours had passed and I should take a brake from driving). I’m of course very grateful for the air condition, as 47°C on the outside are really not tolerable without one! And of course it remains really fun to drive!

Another first for my Ibiza: First time on board! Just after returning from Aetoloakarnania, I’m headed for Crete. My car is so loaded with stuff for my sister’s wedding, there’s only room for the driver – barely! I’ll probably post some photos when I get on dry land.

I’m leaving on vacations at the end of next week, so I’m trying my hand in updating my livejournal with my cell phone (Nokia 6600).

It’s been quite some time… I’m back from vacations (which was in July), August has passed, I’m constantly staying up after 1:00 in the night to watch X-Files and I’m hoping I can remember to write to this blog more often…

My Ibiza caught fire! Well, almost, it just got really really hot and a red warning light came on! I had to pull over, but where I was there was no room to pull over. So I stopped in the middle of the (not very large, of course) street, and I blocked several cars behind me. Thankfully there was a foine lad behind me who had water to put in the car radiator, so it cooled down enough to get home, although we poured some 3 bottles of mineral water (only one we could find, from a kiosk!:)) in the radiator. I was just trying to get a neighbour to Piraeus to buy a keyboard and floppy for the new PC she bought. We didn’t get to complete the installation, because there was not time. I just got the HD to make a backup of important stuff…