This is how it all began: Snow. 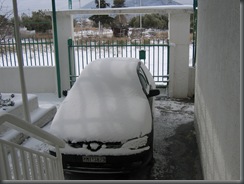 A lot of snow. Me, living near the sea for most of my life (Piraeus) hadn’t seen much snow in my life. In fact I think that I’ve only seen snow maybe four or five times before this. So, now I’ve moved to the highlands of Gerakas, it seems that the weather gods saw fit to reward me with the largest amount of snow I’ve ever seen – and it also seems it was a lot of snow even for less snow-deprived people. How many times did I use snow in the last paragraph?

After that, it got worse: 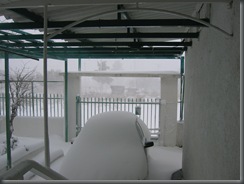 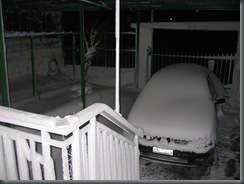 That’s a cheap thermometer on the ledge there. It went down to -4°C at least, maybe less. 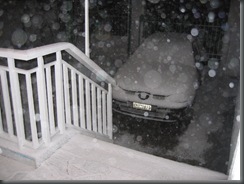 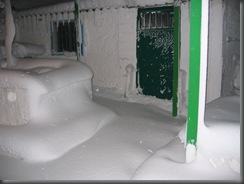 Until the next day: 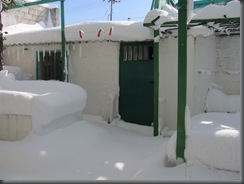 I’m sure there’s my car under there: 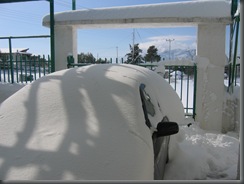 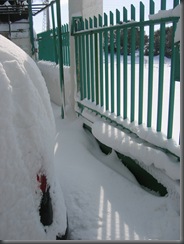 This is how high the snow was in front of my door. I would say it’s about 80 cm off the ground. 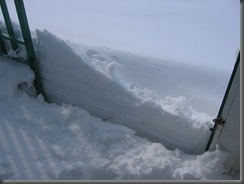 You can’t believe there’s ground under there, can you? 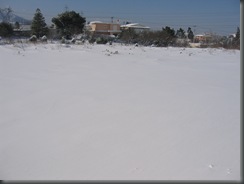 The water supply pipes had frozen over, so I didn’t have drinking or any water at all. 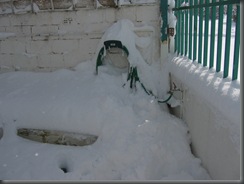 I almost felt like a primitive man, picking up snow or even ice blocks by the handful and melting in the water heater to make water (not drinkable), carefully counting how much water I have left in the fridge and rationing it to last for the longest possible. 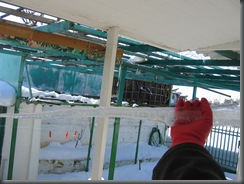 I didn’t make a snowman. I don’t think anyone should make snowmen alone. Even Calvin had Hobbes. I had enough adventures trying to restart the central heating (the lock had frozen over, so I had to melt the ice that had formed using a lighter to open the door).

Finally, this morning (Tuesday) the snow started to really melt. My cousin came over to fix the broken water supply.

Of course I had the whole distance from my house to the street to cover (or actually to uncover). I was very fortunate that a man in a private bulldozer came and cleared up in 2-3 minutes what would have taken me all afternoon.

Update: I had this post saved somewhere, and after some polishing, I’m posting it for real.

No comments yet. Be the first.